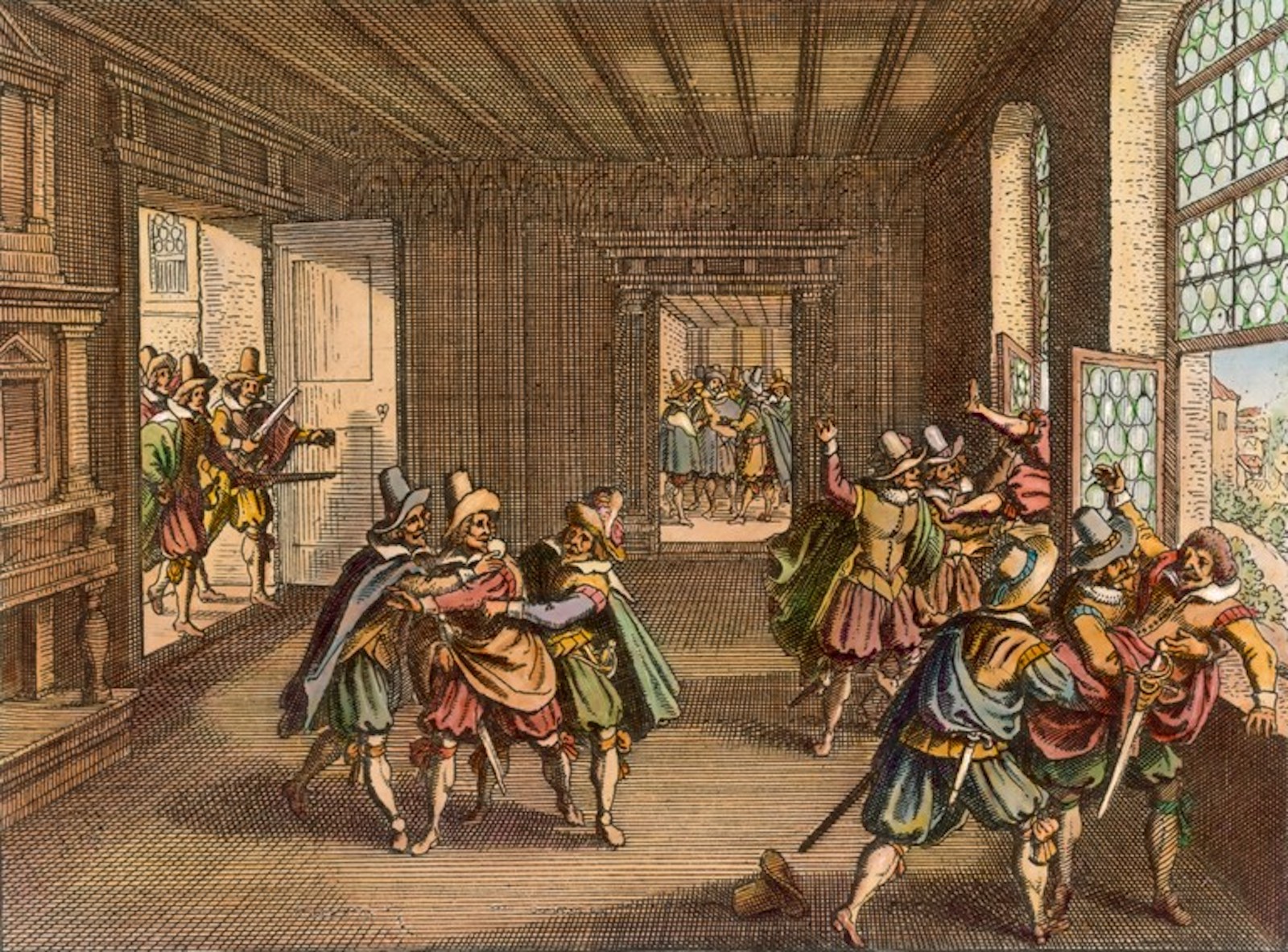 Throwing Religious Violence Out the Window

Don’t look for many memorials dedicated to the second Defenestration of Prague. You will find a modest plaque at Prague Castle, site of the event. Defenestration does not commend itself to most of us as a celebratory sort of event. The Latin language gives us so many great and bizarre words. Fenestra, the Latin term for window, joins the prefix to describe the act of throwing an object or a person out the window. Leave it to Latin to make the most mundane of tasks sound refined. When defenestration involves people, it leaves the realm of curiosity and enters the category of brutality.

The historical context for the Defenestration of Prague arose from a division between the ruler of Bohemia and soon-to-be Holy Roman Emperor, Ferdinand II, and his subjects. Many Bohemians had embraced the theology of Jan Hus since the early fifteenth century. They recognized Hussite ideas in the emerging theology of the Protestant reform movements and identified as Protestant themselves during the sixteenth century. The Holy Roman Empire had observed an uneasy truce between Protestant and Catholic territories since the 1555 Peace of Augsburg. Emperor Rudolph II had issued the Letter of Majesty in 1609 as a measure to guarantee religious toleration for bohemian Protestants. Ferdinand, a staunch Catholic, desired to humble Protestants in Bohemia and was willing to break the peace to achieve this goal.

Ferdinand moved against the Protestants by refusing to allow them to build Protestant chapels on royal lands. Outraged Protestants desired to force their ruler to honor the promises made in the Letter of Majesty. They marched to Prague Castle on May 23, 1618, where they found four Catholic regents. Heated conversations ensued in which the Catholic nobles argued in favor of Ferdinand’s initiatives and the Protestants demanded that they confess their guilt for supporting the Emperor. Having expelled two of the Catholic officials from the room, the Protestants picked up Jaroslav Martinic and William Slavata as well as their secretary, Philip Fabricus. The Protestants, led by the Count von Thurn, heaved these men out the second story window. They fell seventy feet to the ground below. They survived. Had they not survived, the tale of the second Prague Defenestration might be viewed as a more grisly event rather than a bizarre oddity. Only Slavata suffered injuries from his fall. The reasons for their survival remain contested. Catholic polemicists claimed that the Blessed Virgin reached down and gently eased them to the ground. Protestants crafted their own explanation after the Catholic version had circulated for a few years. They claimed that the three men had landed in a moist pile of dung which lay just below the window. The Protestant version was contrived too late to be reliable and the Catholic version hinges on the belief that the Blessed Virgin is aware of human follies and spends her valuable time catching falling Bohemians.

The Defenestration of Prague does not draw much attention beyond that of people who have an interest in European history or the Thirty Years War. Beyond that, most defenestration enthusiasts are people who simply love weird history. Though the Defenestration itself seems almost comical, it precipitated one of the most deadly wars in history. The Bohemian Estates determined to reject the rule of Ferdinand and instead proclaimed Frederick V, ruler of the Palatinate and son-in-law of the English King James I, as their ruler. Ferdinand and Frederick battled for supremacy in Bohemia until Ferdinand’s victory at the Battle of White Mountain on November 8, 1620. Though Ferdinand won this initial phase of the conflict, the strife initiated by these events continued to snowball until most of the nations of Europe were engaged at one point or another. The states of the Holy Roman Empire (modern Germany and Austria) were devastated as army after army swept across their territories. Disease ran rampant and witch-hunts erupted in some of the southern states.

The Defenestration of Prague does not merit celebration, but the eventual end of hostilities does. There was no magic spell that made all religious conflict cease due to the Peace of Westphalia in 1648. The peace itself consisted of a series of separate treaties forged by parties that met in separate groups for fear that there might be hostilities again if they were working in close proximity. The Thirty Years War and Westphalia, however, stand as pivotal events at a time in the mid-seventeenth century when people were starting to wonder whether there was a better way to solve religious conflict than throwing people out of windows. Protestants and Catholics had tried to blow each other off the map for a century and half with no good results. The sides had realigned several times, territory was traded sometimes, but both Christian movements stood strong in the mid-seventeenth century. Military conflict, which was always about more than just religion even when the sides were roughly Protestant and Catholic, began to emerge for different causes and often between co-religionists. The careful creation of religious liberty in the American body politic was an effort by leaders who recognized the devastating legacy of European religious intolerance and did not want to see it repeated in the United States. It is worth remembering in our own overheated debates over religious and social issues that violence is a real possibility. Religious violence produced by radical groups continues in our own times. To say that such violence is a thing of the past would be naïve at best and delusional at worst. We have made progress over the last four hundred years. In the case of the Defenestration of Prague, we celebrate not that it happened, but rather we remember in hopes that such things will not happen again.